April Fools' Day is not a public holiday celebrated on April 1st that involves pranks upon one another. On this day, Ian reports fake stories, which are usually explained the next day or later. 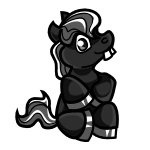 April is here and so was April Fools' day! The whole site fell for our little trick and tried to get the new pet. We will retire the avatar as soon as the new pet is released some time this week. Due to its popularity, we will be releasing it as a non-limited pet. It may not have the tooth but we will keep its current name. That means that the new is not actually part of this month's upgrades, sorry, that was a lie too! We do however have an upgrades set for this month - which is smaller than March's because there was too much for you and for us last month. We can also let you know that this month we will release a new world, at least three new flash games, lots of items, new pets, tons more features and we will also be restarting work on MaraTalk so that it can be here for the Summer. We also hope to have the famous Easter Egg hunt, the end of the MaraPop Event and the end to our Referrals Card contest! We will continue to work hard to ensure that we have the hardware we need to stop any lag and server errors too - we have already doubled the amount of servers for our layout and they should be installed on Monday. April will be another great month for us, so make sure you are around! Even if its just to win a Playstation Portable or Ipod Nano....

We are a little behind schedule for the Monthly Prize Giveaway which was supposed to have started now. It will be ready sometime today - it was NOT an April Fools joke, we will be giving away over $1,000 worth of prizes EVERY month.

We bring good news today, on a rather unexpected outcome to a secret peace conference that has being occurring to discuss the war. During their attendance at the conference, it is rumoured that King Baspinar XIII and Queen Eleka had been conducting private talks on the future of Marada's ecology in respect to the large number of Muskits and Swondors that have been killed as a result of the war.

It was announced today that during these talks the two rivals fell in love and were married in a secret ceremony several days ago! We also bring you the happy news that Queen Eleka is already expecting their heir to the throne. The happy couple have revealed that they intend to name their first-born Princess Laimay III (we just hope that it turns out to be a girl!) The Laimay will be our 40th species of Marapet, and will be the rarest of all the limited edition pets. We are not quite sure when it will arrive, as Eleka has declined to comment on the due date.

Obviously, the ongoing war is now cancelled, but there will still be plenty of changes happening to the site as Eleka's Castle is to be immediately vacated, and work is commencing on Baspinar's Castle to "bring it out of the dark ages and make it fit to live in" as Eleka tactfully puts it. War points will soon also be spendable in a new nursery shop that is opening soon.

But as it's not April Fools Day anymore, we can actually tell you that this is the 40th Marapet and is non-limited edition, so you can go and create one now! This is actually a Crindol. The war is still on and there will be more war related news soon!

We have had so many requests for Chibs and Quells to be re-released in the Account Upgrades again but we have decided that these pets have been limited edition for so long that they are not really that limited anymore! Because they are so popular and everyone wants to have one, we have made them non-limited edition pets now and anyone can create one for free. We are sorry for those who have already paid millions for one, but there are lots of other limited edition pets you can get instead!

To help keep these pets limited edition and rare, once the Chibs potions are retired from the current Account Upgrades they will not be released in the Account Upgrades again for at least another 2 years! This will be your last chance to get these pet species from Account Upgrades for a long time!!

Introducing our 65th species of Marapet. The Kay is a Restricted Pet. To get hold of this special new pet, you will first need 10 regular limited edition pets such as the Chibs and purchase the new Intellectually Challenged Treasure Map in the new Account Upgrades.

The Echlin is now available in zombie, mutant, mummy and prison costumes!

For anyone interested in the Kay pet, it was an April Fool's Day joke and will not be released!

The Chibs pet has finally had a revamp. The Chibs pet is one of our oldest pets and change was well overdue! We made the Chibs cuter and chubbier and have renamed it Chubs. We hope you like the new Chubs! The next day... The Chubs is not a pet, it's a joke. The Chibs will not be changing!

NOTICE - this news was an April Fool's Day joke and is not a real event.

It has been a week since the Pot of Gold event where Zetzilla ate all 1,001,605 items that were donated. He was so full that he has stayed quiet since. Now it seems all of those Baby Costumes he ate have given him the taste for pets too! He has randomly been biting the heads off of your pets.

For the next 7 days, you need to search Marapets for the missing pet heads. Just like the pumpkin hunt, these heads will randomly show up on the page. The more heads that you find, the more prizes you will win. At the end of the event, if every missing head is found, your pets will return to normal! The top 100 players who find the most pet heads will receive a Headless Costume and 1,000,000MP!

The fourth and final pet revamp of the day is the Chibs. We hope you like the changes!

Now that APRIL FOOL'S DAY is over... here is the new Chibs!

If you said yes to the following question, then get ready for: SUPER HAPPY MARAPET FUN TIME CHUBS!!!

That's right, the SHMFT Chubs is way cuter and chubbier than your average Chibs.

caption me like one of your French girls
Retrieved from "https://marapets.fandom.com/wiki/April_Fools?oldid=40098"
Community content is available under CC-BY-SA unless otherwise noted.