As much as we'd love to never have any errors or bugs, sometimes these can happen.

Server errors have always had one outcome: unhappy maradans!

It is inevitable to avoid errors, and all sites have them at some point. However, for some reason, Maradans take it really hard when the site is malfunctioning. It seems it's hard to understand that after all, it takes time to get a site in tip-top shape. "The problem for us is that MaraPets is very complex and is open 24 hours a day, only ever closed when we plan Maintenance and for the power to be switched off suddenly while over 800 players are playing and hundreds more 'guests' are browsing can cause issues."

Sites break, it's a fact of life!

Perhaps the most notorious thing about Marapets server errors is not the error itself, but the way it is portrayed. Unfortunately for the Error Troit, it is now his turn to take the bashing for the site's mishaps (literally and figuratively). This poor little guy is cursed at often by many players!

His Trading Card was obtainable through the Capsule Machine. He also has a photo that was exclusive to the Vault.

We are unsure when this guy got introduced, but he was succeeded by the Error Troit (above) in July of 2008. Not many people hated this guy, in fact during the time this guy was around, server errors were blamed on some other pet... can you guess which? Read below to find out who!

At the beginning of Marapets, the Chibs was the initial poster pet for server errors. It was also the second logo for Marapets before the staff realized that players would feel bad for browsing the site. This was kind of endearing, in a way, compared to the visceral reaction of spotting a yellow snake hissing.

Players get 404 Errors after typing in a URL that of which does not exist in the site, such as the Dukka Piracy.

Description: The page you are looking for does not exist
If you need help looking for a specific page on Marapets please use the Help Forum

If this is a broken link or an error, please report it to us at the Errors & Bugs Forum

Add a photo to this gallery

The Angel Potato was a potato in a sky blue veil with blue wings and a yellow harp. It was succeeded by the Newths at Work (below).

The Newths at Work are Newths who do construction work around Marada. They made their first appearance in July 2015 when the site went down for maintenance. 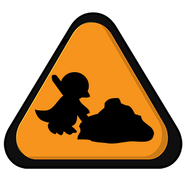 Add a photo to this gallery

Other errors that are not common, or haven't stirred up the community in Marapets. Either way, we caught one, read on.

In November 2009, an error message that was never seen before, or after was shown on alerts. Ian got a bit creative with the Olympics coming and all. Alerts were down, and they remained down for a while. That Christmas (2009-10) users decided to take advantage of the alerts being down and organized "food fights", sending food items to one another along with other items. At some point books were being sent as well, and encyclopedias (in order to spell funny messages) were also sent. When alerts were finally fixed in January, all the alerts (thousands for some players) popped-up.

Broken alerts weren't something new, but in other occasions, the error troit or the error knutt showed up instead when attempting to access them.

"Don't even move a step forward!" - Sometimes you just want to use some items, right? Well, NOPE. These pets are/were here to make sure you will not accomplish something you aren't supposed to.

The error Quell was probably introduced in the early days of the site, when Quells were introduced (around June 2005). This guy meant business when he wanted to stop you from doing things you're not supposed to. No need to call the Maradan Police when this guy was around! I mean, look at that sign! *hiss*

If you're the kind of person who isn't intimidated by evil signs, then snakes probably will. The Error Poera was introduced in July 2008, and it sure scared the pants off young Maradans when they got this. If not, it would annoy them to no end (whichever is worse).

The error Kujo was introduced in 2014, Marapets' 10th Anniversary. When players attempted to use an item in an erroneous way or go to an area that was not ready to be released yet, his computer would crash. This little guy was likely a user of the Marapets website: a game within a game! (BRAAAHHHM)

If you play Marapets on a mobile device, a Jessup and some Xois (that are maybe meant to be the kids from Travis Truck) will appear if you try to play specific games if you hold your device vertically (such as Extract Enpiah or Sewer Struggle).

The Newths at it again...

It is very likely that the Newth was subject of bashing when the Advent Calendar wasn't functioning in ancient Marapets. Maybe it's because they kidnapped the Easter Bunny. However, they climbed up the pet echelon by working the Plushie Machine and releasing new plushies. Nowadays, they constantly work for on-site maintenance and replaced the Error Kujo in 2020. If you ever find any errors or problems around the site, please let them know about it at the Errors or Bugs Forum so these can be fixed right away.

Retrieved from "https://marapets.fandom.com/wiki/Error?oldid=49810"
Community content is available under CC-BY-SA unless otherwise noted.