The Royal Costume is a retired costume that stepped onto the throne of the Account Upgrades Page in August 2006. After being dethroned and exiled for being forgotten about ever since, it has returned in March 2020 for its very own AU Set. Put this costume on certain marapets and it will make it look like medieval royalty! Royal pets are aristocratic rulers of the Middle Ages; they wear a crown (or bard's cap), velvet robe with animal fur, poncy clothing, and a staff topped with a gem (apart from the Wallop, who instead wields a spade). 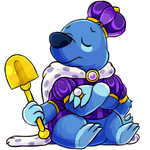 Wallop
Community content is available under CC-BY-SA unless otherwise noted.